I am your ISBN~ LOVE ME!


For most of us who have been in the publishing industry for a while, we know what an ISBN is but we may not know a lot about it. For many first time or new authors coming into the profession, the ISBN is a bit of a mystery. I am an author but I also have a day job working for an online bookseller – I deal with ISBNs daily. I'd like to take out the mystery and help all authors get a grasp on the ISBN and why it's your friend.

ISBN stands for "International Standard Business Number" and basically, it is nothing more than a tracking device. That's it, that's all it does. It tracks your sales. Think about when you go in a bookstore. You get a really good book you like and you decide to buy it. You take it to the counter and what's the first thing the salesperson does? S/he turns the book over and uses a scanner to track the book. That racks up a sale based on the ISBN – well, and the bar code which is an electronic representation of your ISBN.

Just as a nice little FYI – periodicals (newspapers, magazines, etc) also have a tracking sytem, called the International Standard Serial Number, also known as the ISSN. There are two different kinds of ISSNs. One is the standard print ISSN and the other called the e-ISSN for digital versions.

Each book, each format of that book, each edition of that book will have its own ISBN – they are specific to the edition, the format (hard cover, paperback, audio, ebook, etc), and title. If you have your book out in ebook, paperback, and audio – then you'll have three separate ISBNs, one for each. Every time your book is purchased, in whatever form and through any bookstore – be it online or a brick and mortar – that ISBN information is stored and transmitted to your publisher (or yourself, if you're an indie). The number keeps track of sales – what the customer bought, when s/he bought it, where s/he bought it, etc. It also tracks information such as publisher identification and language group.

Once upon a time, sales were tracked locally but in a very haphazard way. So, in 1965, Professor Emeritus Gordon Foster (Trinity College in Dublin, Ireland) devised a tracking method called Standard Book Numbering or the SBN. The original SBN was a nine digit number. In 1970, the International Organization for Standardization (ISO) developed the ten (10) digit ISBN in an effort to standardized what was becoming a global market for book sales. Then in 2007, the thirteen (13) digits number became the standard, which includes the EAN – once known as the European Article Number but has since been renamed the International Article Number – that you see at the bottom of the bar code.

Let's look at a typical bar code to break down what you can find out from the ISBN. 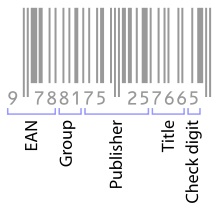 The EAN (978) is what signifies that this is a book that is being purchased. The first number always goes outside of the bar code, which is used for scanners to record sales. That's literally the only reason. The number following the EAN is the actual ISBN. For the ISSN, the EAN is 977. Just in case you were curious.

The next group of digits, usually a four digit code represents the publisher.  All books published by a particular publisher will have that same four digits. So if you, as an indie author, buy up a large enough block of ISBNs, Bowker – the company in this country that regulates and sells ISBNs – will allow you to register as a publisher/imprint. You will get a unique four digit identifier and from then on, all of your ISBNs will contain that identifier.

The next three digits identify the title. Your book, The Glory of Handbags, will have a specific number that will be unique to the title.

The last digit is a check number that uses a sophisticated algorithm that verifies that all of the information in the EAN barcode and ISBN are correct.

If you publish with a traditional press – large or small – these numbers help them track their sales using internal algorithms that can break down the data by version sold, where it was purchased, when it was purchased, and the type of sale (credit card or cash, online or "brick and mortar" store). These reports will determine your royalties as well as the editorial and marketing staff's cut, as well as the profit margin for the publisher.

If you're a self-published Indie, then you're using companies like Smashwords to distribute to retailer and wholesalers, or straight to the retailers like Barnes & Noble's PubIt or Amazon's KDP Platform (for ebook) or CreateSpace (for print/trade paperback). They generate an abbreviated report for you that give you a minor breakdown of sales by region/country, title/format, the total amount of sales, and the amount of royalties you'll be paid for those sales.

You can learn even more about ISBNs and how to use them, as well as how to purchase them, directly from Bowker's Identifier Services. The site will require you to create an account if you want to use that service. ISBNs purchased directly from Bowker are cheaper if purchased in larger quantities of ten or more. If all you want is one ISBN, you can find other services that will sell them in singles – a search on Google or Yahoo! can give you links to websites that will sell them to you. Pricing usually starts at $25 – 35 per ISBN and in some cases will also include the EAN bar code to put on the cover of your print copy. If you're creating an ebook or audiobook, you won't need that barcode.

Written by Jesse V Coffey
at 5:00 AM No comments: